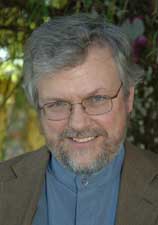 This is the 45th year that David W. Oaks is working as a psychiatric survivor community organizer for human rights in mental health.

David is the former Executive Director of MindFreedom International, an independent nonprofit coalition for human rights and alternatives in mental health, founded in 1986. David is a founding board member of Oregon Consumer/Survivor Coalition (OCSC), a nonprofit that is a “united voice for change” for Oregon’s mental health consumer/psychiatric survivor organizations.

In the 1970′s, as a college student at Harvard on scholarship, David experienced psychiatric institutionalization five times, and was diagnosed as an incurable “schizophrenic.” In the start of his senior year in 1976, Harvard placed him as an intern in one of the early psychiatric survivor activist organizations. Through peer-run alternatives, David recovered and graduated with honors in 1977. He has been an international community organizer of mental health consumers and psychiatric survivors ever since.

Climbing a ladder for the family cat in December, 2012, David fell and broke his neck. After David’s accident, he has become a determined advocate for change in the disability system.

David is available for speaking engagements, consultation, and stand-up comedy. In 2016, David acted as an independent paid consultant for the World Health Organization, for their manuals about empowerment in mental health. Aciu! Institute‘s main client is now MindFreedom International, and David is helping to re-build their Support Coalition of Affiliates and Sponsors.

“Today more people than ever are talking about global peaceful revolution. Since I have called for this for decades, I am enthused that we are actually peacefully overthrowing the status quo. Label me revolutionary!”

With his wife Debra, he lives in Eugene, Oregon. Email David.

Connect to David via LinkedIn!

For information about speaking engagements or other public appearances, please email David’s office. You can also follow David on Twitter: www.twitter.com/davidwoaks

1 thought on “About David”