Let us thank young people for their leadership, vision, creativity and for just putting up with the bullshit that is piling up all around us!

Yes, we should give everyone an award, just for existing! But where do we start? I agree with the philosophy shared by many and credited to the Iroquois Confederacy: think ahead seven generations. How about we start with folks under 30, the ones we in the counterculture are supposed to trust.

I figure that seven generations from now would be a few years after the turn of the century, 2200. That might seem like a very long time, but there are some kids today, who when they are old, will share the planet with some little kids who will, we hope, reach the year 2200.

We owe the future a big, huge apology. We also can thank the future for their leadership!

Patch Adams, MD (shown on the left picking his nose with me), suggested that we award a few young leaders, and he has an idea about where we can start:

At Oregon Country Fair, an enormous celebration in the woods near Veneta each July that is wonderful and indescribable, I often have the chance to catch up with my friend “The Real” Patch Adams, MD, who goes each year to connect with his grand-kids. I have often blogged about my most-famous friend, because he often shares wonderful humor, strangeness and creativity.

Back at OCF 2012, a number of us gave an award, artistically created from recycled materials by psychiatric survivor art gallery owner Tim Boyden from OutOnALimb (see award image below). Since then we have given many awards, using PDF’s inserted with names and achievements.

Below are a few, usually given to thank great folks, or in the case of our Congress person Rep. Peter Defazio, to remind him to be an authentic fighter for the underdog, such as folks in the mental health system. Below is also a humorous award we gave to the local Chamber of Commerce to encourage them to speak up about the climate crisis.

We want your suggestions now: How can we all nominate young people, say under the age of 30, to appreciate their work and leadership into the future? Perhaps using online surveys? A panel of judges including young people? Do you have ideas to make these awards creative? Do you want to help on any of this? You can comment here, or email me privately at davidwoaks@gmail.com

Who do you think should be thanked? Wouldn’t it be fun to hand deliver a few at OCF 2018? The timing, July 13, 14, 15, happens to be the last three days of Creative Maladjustment Week, which many readers knows we celebrate, in the spirit of Martin Luther King who envisioned an International Association for the Advancement of Creative Maladjustment.

Here are a few awards: 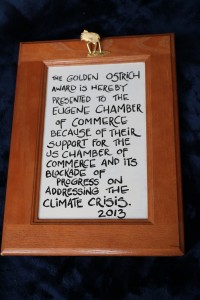 Because of their silence about the climate crisis, here is the Award we gave to the Eugene Chamber with our tongues in our cheeks. Psychiatric survivor artist Tim Boyden created this award. 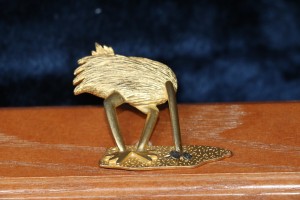 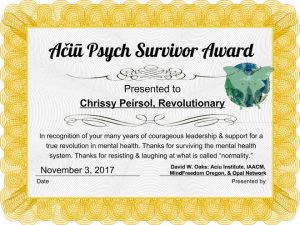 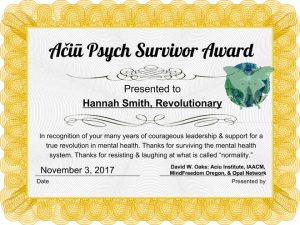 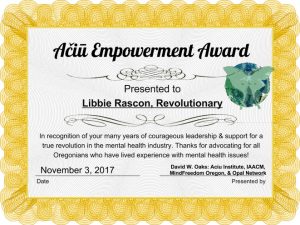 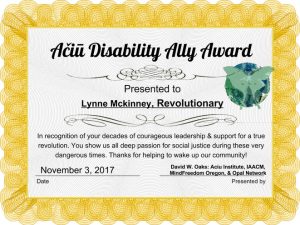 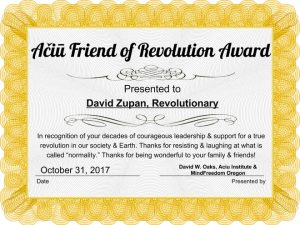 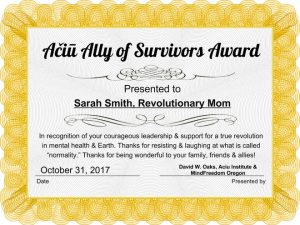 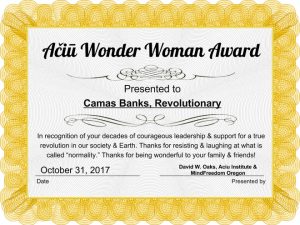 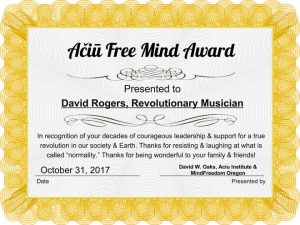 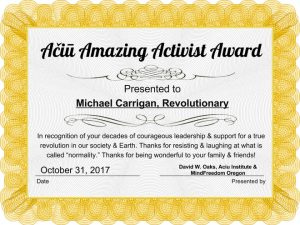 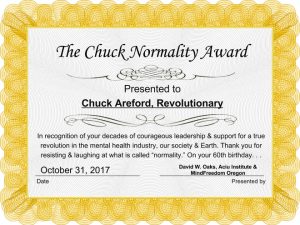 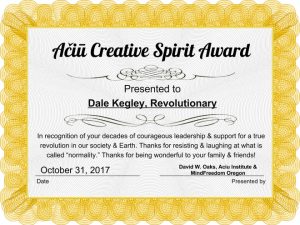