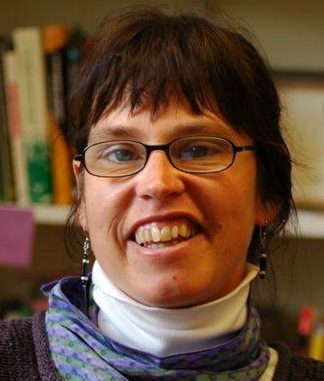 Recently I commented on a new, important book on this very subject. A tenured professor at the University of Oregon, Kari Norgaard, has written a book about what is considered “normal.” She explored a small, prosperous, well-educated Norwegian town, and teased out why the population was not taking sufficient actions to discuss and address the climate crisis. For her leadership, she was attacked on national radio by the extremist, Rush Limbaugh. END_OF_DOCUMENT_TOKEN_TO_BE_REPLACED 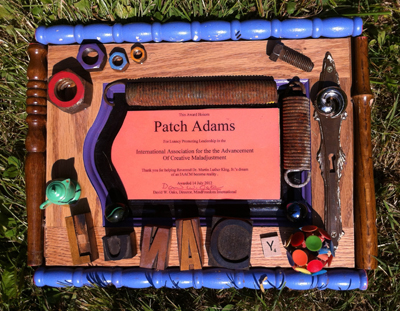 There we were on 14 July 2012, walking down the winding path of the Oregon Country Fair, where tens of thousands every July have filled crowded paths through a woods full of music, crafts and food booths, lovingly stewarding the spirit of the 60’s since 1969. I was ushering Patch with a bullhorn, calling out, “Here comes Patch Adams, to accept an award for lunacy promotion!”

Dr. Adams was in his clown regalia for the walk: Pants pulled up to his armpits, strange grimace on his face, holding a big fake fish in front of his face to help motivate himself for his slow strange walk.

For those too young to know, Patch is a psychiatric survivor, physician and clown, who was the subject of an Academy Award winning film named after him and inspired by his life, starring comedian Robin Williams. Patch is the most famous leader in our MindFreedom International community, and has a network of thousands who seek truly deep change throughout our health care system.

Patch and I were headed down the Oregon Country Fair path to a gathering to give Patch an award (see photo on left) for his leadership of a vision created by Martin Luther King, Jr. that few people seem to have heard about:

MLK, in many speeches and essays, said the world may be in dire need of a new organization that MLK called, “The International Association for the Advancement of Creative Maladjustment” or IAACM. It was an laugh-line, but like many good jokes had logic and truth behind it. MLK said we all ought to be maladjusted to oppression, the question is can we be creative in our maladjustment, rather than self-destructive? Repeatedly, MLK said in a variety of ways, “the salvation of the world lies in the hands of the creatively maladjusted.”

Well, in Patch’s hands that day was a fish.

Accompanying us on our walk through the Oregon Country Fair was Patch’s main leader for changing the mental health system, Carl Hammerschlag, a psychiatrist/author from Arizona. Carl called out occasionally on the path, “How many six-foot-six psychiatrists do you see in a pink ballerina outfit?” Because that is what Carl was wearing from head to foot, tutu included.

Does this kind of positive celebration of mental and emotional differences necessarily mean opposing rationality? As a leader for 36 years in what is often called the “mad movement,” I know some seem to assume that we are largely celebrating illogic and irrationality. I do not agree.

As a psychiatric survivor who has been through five institutionalizations, and quite a number of diagnoses, I can tell you that one of the tools for my own recovery was the use of logic, evidence, and rationality.

Today, here is a very simple and undeniable logic to consider: What is generally called “normal” by just about any common definition, is in fact causing a climate crisis, and countless other environmental disasters. I’m not saying all that is called “normal,” is bad, just that one of the worst spiritual illnesses to ever visit our planet Earth has that name: Normal.

Throughout human history, respected thought leaders such as Socrates have said the pursuit of wisdom begins by recognizing that none of us has a grip on reality, that we all know nothing with certainty. And now, the scientific jury is back, the evidence has been rationally considered, and the logic is irrefutable: Socrates was right. What is called “normal” may be guilty of Gaia-cide, the shredding of our precious planet’s web of life.

That’s why I have been saying that the slogan of the mad movement ought to be, “We are the 100 percent.”

So yes, when Patch and Carl and I navigate a crowded path of the Oregon Country Fair, bullhorn in hand, with Patch following his fish, and Carl prancing around in his pink tutu… Yes, it may look a tiny bit irrational. But logic is one of the strands motivating us, the logic that MLK brought to us all many times when he called for the International Association for the Advancement of Creative Maladjustment. (IAACM).

Please take the next logical step, and ask yourself: “How can I best exercise my own leadership in the IAACM?