We are hearing a lot about how the Democratic and Republican parties are so separate. But when it comes to psychiatric survivors, both parties have been willing to throw our folks under a bus. The US Congress simply does not represent us.

International Association for the Advancement of Creative Maladjustment says it hosts a “little peaceful Speak Out Against Psychiatric Dosing” event in Kesey Square 1:30 pm Friday, Nov. 4, 2016. Organizer David Oaks says, “After speakers and an open mic, we will march together to the office of Rep. Pete DeFazio, to object to his co-sponsorship of a bill that would increase outpatient coercion in mental health.” Free.

About a dozen of us held this “Tour” here in Eugene, Oregon to educate the public and our congressperson about human rights and mental health. Unfortunately, Rep. Peter DeFazio (D-OR), who has for decades been a progressive champion of the underdog, has been terribly misinformed, and is a co-sponsor of the worst mental health legislation I have ever seen.

Known as the Murphy Law, thankfully H.R. 2646 has been held up by the US Senate, so far. The worst part of this proposal is that it would give millions of federal taxpayer dollars to support forced outpatient commitment. That is, courts could order Americans living peacefully at home to take psychiatric drugs against their will.

Incredibly, during a public debate in the “Letters to the Editor” of our Eugene Weekly, Rep. DeFazio not only defended his support, but for the first time in my decades of fighting Involuntary Outpatient Commitment (IOC), he tried to deny that this was mainly about forcing drugs. You may read the three-part published debate between me and Rep. DeFazio here.

What is this bill about, forced hugs? Forced hot chocolate? No, this is about forced drugs of people in their own homes. Frankly, forced hugs and forced hot chocolate are wrong, too. However, I guarantee, along with all the incredible mental health advocacy groups in the USA, that IOC is about the drugs. We have fought these bills on the state level for decades. However, now this is on the federal level, and somehow Rep. DeFazio has been tricked by proponents to believe this has little to do with forced drugs.

Our Tour from Kesey Square to the Federal Building

We started with an ice-breaking introduction at Kesey Square, next to a statue of Ken Kesey, my late friend who authored “One Flew Over the Cuckoo’s Nest.” Among the participants were my friends Dale Kegley and David Zupan. Sarah Smith from MindFreedom was there. One of the main activist labeled autistic, Howard, was there. Psychiatric survivor Gail Roberts was present. Ian McTeague, a young local community organizer, pulled our wagon.

Several other great activists were there, thanks! Like the cuckoo, we then flew East, on Broadway for a few blocks, to the huge, newish Federal Building. Since security refused to allow us all in, a staff person from Rep. DeFazio’s office came out to meet with us.

For more information about fighting the Murphy bill, and how you need to keep up pressure going into 2017, see my earlier blog entry here.
During our tour on Friday, we chose to deliver our message with humor and positivity. We gave them three awards, assuming “the real” Rep. DeFazio will appear some day and oppose the Murphy Bill. Here is the wording of the three awards:

Award # 1: For Your Future Accomplishment
Presented to THE REAL Rep. Peter DeFazio (D-OR).
We know the real you: A champion for the powerless. Soon you will see through the Murphy Law, and realize that forced pharma is a key part. Ken Kesey said “Dosing is always wrong!” No forced drugs!

Award # 2: For Saying “No” to Murphy
Presented to THE REAL Rep. Peter DeFazio (D-OR).
Please say to Murphy Law supporters: “If you support forced psychiatry, then you first!” Challenge them to get a mental health check-up first! Tell them that forced psych drugging is the Bill Cosby School of Mental Health.

Award # 3: The Golden Pill Bottle Award. (We affixed a bunch of golden-color pill bottles to the plaque for this one!)

Presented to THE REAL Rep. Peter DeFazio (D-OR). Because you are a skeptic of big corporate power, you can spot the lies of Big Pharma. More than one half of the budget of NAMI comes from drug companies. The Murphy Law is by Big Pharma and would force their drugs!

If You Live in the Eugene Area?

Please contact the office of Rep. Peter DeFazio by email, now! This just takes a moment. Simply click on this link, and oppose H.R.2646: https://defazio.house.gov/contact/email-me 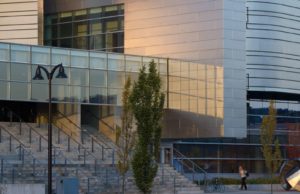 We are glad we discussed NAMI, which is one of the largest mental health advocacy groups. The individual from DeFazio’s office talked about NAMI, but did not know that a Senate investigation revealed that NAMI privately received a majority of its funds from pharmaceutical corporations. For more info about NAMI’s secret source of money, click here for a New York Times article from 2009 that sums up this issue.

The fact that the staff person brought up NAMI is so important, that I have copied the text from this New York Times article:

WASHINGTON — A majority of the donations made to the National Alliance on Mental Illness, one of the nation’s most influential disease advocacy groups, have come from drug makers in recent years, according to Congressional investigators.

The alliance, known as NAMI, has long been criticized for coordinating some of its lobbying efforts with drug makers and for pushing legislation that also benefits industry.

Last spring, Senator Charles E. Grassley, Republican of Iowa, sent letters to the alliance and about a dozen other influential disease and patient advocacy organizations asking about their ties to drug and device makers. The request was part of his investigation into the drug industry’s influence on the practice of medicine.

The mental health alliance, which is hugely influential in many state capitols, has refused for years to disclose specifics of its fund-raising, saying the details were private.

But according to investigators in Mr. Grassley’s office and documents obtained by The New York Times, drug makers from 2006 to 2008 contributed nearly $23 million to the alliance, about three-quarters of its donations.

Even the group’s executive director, Michael Fitzpatrick, said in an interview that the drug companies’ donations were excessive and that things would change.

“For at least the years of ’07, ’08 and ’09, the percentage of money from pharma has been higher than we have wanted it to be,” Mr. Fitzpatrick said.

He promised that the industry’s share of the organization’s fund-raising would drop “significantly” next year.

“I understand that NAMI gets painted as being in the pockets of pharmaceutical companies, and somehow that all we care about is pharmaceuticals,” Mr. Fitzpatrick said. “It’s simply not true.”

Mr. Fitzpatrick said Mr. Grassley’s scrutiny, which he described as understandable given the attention paid to potential conflicts of interest in medicine, had led his organization to begin posting on its Web site the names of companies that donate $5,000 or more. And he predicted that other patient and disease advocacy groups would be prodded by Mr. Grassley’s investigation to do the same.

“Everyone I talk to wants to have more balanced fund-raising,” Mr. Fitzpatrick said.

In a statement, Mr. Grassley praised the alliance for its disclosures. “It’d be good for the system for other patient groups to do what NAMI has done,” he said.

Mr. Grassley’s scrutiny has been unnerving for patient and disease advocacy groups, which are often filled with sincere people who are either afflicted with serious illnesses themselves or have family members who have been affected. Many join the groups in the hope of making sense of their misfortune by helping to find a cure or raising awareness of a disease’s risks and frequency.

Drug makers are natural allies in these pursuits since cures may come out of corporate laboratories and the industry’s money can help finance public service campaigns and fund-raising dinners. But industry critics have long derided some patient organizations as little more than front groups devoted to lobbying on issues that affect industry profits, and few have come under more scrutiny for industry ties than the mental health alliance.

For years, the alliance has fought states’ legislative efforts to limit doctors’ freedom to prescribe drugs, no matter how expensive, to treat mental illness in patients who rely on government health care programs like Medicaid. Some of these medicines routinely top the list of the most expensive drugs that states buy for their poorest patients.

Mr. Fitzpatrick defended these lobbying efforts, saying they were just one of many the organization routinely undertook.

The close ties between the alliance and drug makers were on stark display last week, when the organization held its annual gala at the Andrew W. Mellon Auditorium on Constitution Avenue in Washington. Tickets were $300 each. Before a dinner of roasted red bell pepper soup, beef tenderloin and tilapia, Dr. Stephen H. Feinstein, president of the alliance’s board, thanked Bristol-Myers Squibb, the pharmaceutical company.

“For the past five years, Bristol-Myers has sponsored this dinner at the highest level,” Dr. Feinstein said.

He then introduced Dr. Fred Grossman, chief of neuroscience research at Bristol-Myers, who told the audience that “now, more than ever, our enduring relationship with NAMI must remain strong.”

Documents obtained by The New York Times show that drug makers have over the years given the mental health alliance — along with millions of dollars in donations — direct advice about how to advocate forcefully for issues that affect industry profits. The documents show, for example, that the alliance’s leaders, including Mr. Fitzpatrick, met with AstraZeneca sales executives on Dec. 16, 2003.

Slides from a presentation delivered by the salesmen show that the company urged the alliance to resist state efforts to limit access to mental health drugs.

“Solutions: Play Hard Ball,” one slide was titled. “Hold policy makers accountable for their decisions in media and in election,” it continued.

The alliance’s own slides concluded by saying, “We appreciate AstraZeneca’s strong support of NAMI.”

Mr. Fitzpatrick said that the alliance frequently had such meetings and that the organization would fight for better access to mental health drugs “even if we had no relationship with pharmaceutical companies.”

Tony Jewell, an AstraZeneca spokesman, said that the company was “committed to improving health through partnerships with nonprofit organizations” and that “includes striving to ensure people can access our medicines through formularies managed by state Medicaid agencies.”

1 thought on “Our “Tour” to the Office of Our Congressperson, Rep. Peter DeFazio, Opposing Forced Psych Drugs”