Update 13 May 2015: *Our Eugene event will be rain or shine. * The Free Speech Plaza is kind of big, so please find us in the Northeast corner up the stairs by the entrance doors to the county, which is also away from the drumming, though it will be noisy so keep your remarks loud and brief!

On May 16, 2015 there will be several dozen grass roots protest against electroshock, mainly in the US but also in about eight other countries. Below is info about our local protest here in Eugene, Oregon, USA:

You may download a PDF of this news release here: Shockprotestnewsrelease 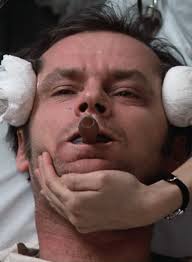 Reviving the spirit of Kesey’s One Flew Over the Cuckoo’s Nest!

Where: Wayne Morse Free Speech Plaza at the northeast corner of 8th and Oak St., across from the Saturday Market.

Speakers in Eugene that day include:

At the end of the Eugene protest, activists will walk to the statue of Ken Kesey at Broadway and Willamette St. to remember his literary resistance to electroshock.

Co-sponsors of the peaceful protest in Eugene include MindFreedom Lane County, International Association for the Advancement of Creative Maladjustment, Network Against Psychiatric Assault, Rethinking Psychiatry, and ectjustice.com, which has more about the protests including a list of planned events. More info can be found on the facebook pages of MindFreedom Lane County and Network Against Psychiatric Assault. May is the annual “National Mental Health Month.